Malcolm Gladwell could get a book out of this

Whatever combination of methods you take to get to work, I’m pretty sure there’s one thing you have in common with everyone else.

That’s the desire to make the journey as quick as possible. If there’s a shortcut that doesn’t involve you being exposed to more congestion or danger or whatever, you’re likely to take it. Even if it just means taking a second off your journey. 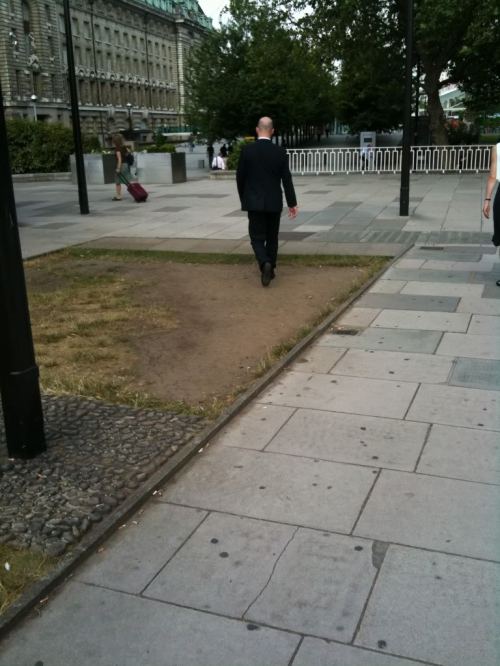 Cutting corners: commuters shaving nanoseconds off their journey have killed the grass. That and no rainfall.

That’s why I found myself perplexed by the actions of most of the commuters in my neighbourhood.

Faced with a choice of several different routes to the local railway station, people will invariably choose the longest one. All the potential routes (save one) involve walking down similar suburban streets. The shortest route doesn’t take you past a noisy factory, a dangerous intersection or groups of hoodies lurking outside a crack den. This is New Malden after all.

So why do people take the longer route? And anyway, how do I know that some routes are quicker than others? What kind of a saddo am I?

When I first moved into the area, I too took the longer route. I didn’t know it at the time – I’d thought that each of the roads to the station was about the same length, but then I noticed something a little odd.

(That’s odd for people like me, who are good at spotting life’s trivialities but who dismally fail to remember things like relatives’ birthdays.)

The thing I noticed was that some roads on the way to the station had more speed humps than others.

I know, it’s a revelation. It’s like my very own Roswell.

I dimly remembered reading somewhere that there were rules and regs concerning the height, positioning and spacing of road humps.

So I reasoned that if there was an equal distance between the humps, and that one road had more humps than others, ergo it would be a longer road.

There are duller blogs, believe me

So I went to Google maps and took a look. Yup. The answer was right there, staring me in the face.

The Groves area of New Malden, showing the route almost everyone takes to get to the station.

The roads that I had initially thought were roughly the same length weren’t anything of the sort.

Lime Grove was a bit longer than Sycamore Grove.

Chestnut Grove was a bit longer still. And outlonging them all was the mighty Acacia Grove.

I sat back, my mind a blizzard of flurrying contradictions. What I had naively thought of as a rectangular grid-like pattern of roads – like Wandsworth’s famous toast rack – was no such thing. It was a quadrilateral alright, but with more of the unmistakeable characteristics of an isosceles trapezoid. Erk!

So why do people approaching from the north and west of Poplar Grove not take Sycamore Grove? One reason is that they don’t really give a toss how long their journey takes. The problem with this is that it would contravene the rock-solid hypothesis I posed in the second paragraph. We can’t have that.

The other reason is down to perception. I think there’s a widespread assumption that Poplar Grove runs parallel to New Malden High Street. So anyone approaching Poplar Grove would see the road they’re on appear to bend to the left, or north, after the intersection. In other words, it would seem to take them further away from their destination.

That would conflict with the shortest-route-possible principle. So instead of taking Sycamore, Lime or Chestnut Groves, most people will walk past all three and take Acacia Grove instead. The longest route possible but, according to their perception, the shortest.

Longest, that is, apart from The Cut. The Cut is a path that runs alongside the railway line. It’s quite a pleasant walk, but for some reason almost everyone snubs this route. I have no idea why.

Nest week, how to drive at speed between steel bollards.