A ball-shaped piece of freedom

I’m not overly-excited by cars or by driving, but I do like driving in the States.

The open highway, the scenery, the roadside diners, the advertising hoardings, the muffler men.

Visiting gas stations was an eye-opener. There was the obscenely low cost of petrol for one thing. When we last there, it was less than a tenth of what we were paying in the UK. No wonder they all drive cars as big as buses.

Then there was the simple act of filling your car with fuel. Because in America, once you’ve pulled the trigger on the petrol pump, it stays pulled. A little ratchet thingy clicks into place and keeps the flow of fuel running.

You can walk off and clean bugs off your windscreen, stock up with water or do whatever you like. The nozzle will just hang there pumping gas into your fuel tank until you squeeze the trigger again or the nozzle’s sensor indicates that the tank is full, whereupon it automatically cuts off.

Why isn’t there a similar system in the UK? The petrol dispensers can’t be that different. I can only assume the ratchet mechanism has been removed for the UK market.

Things are always being changed ‘to suit the UK market’. This normally means removing the taste, strength or functionality of something before we can be trusted with it. For example, it was only recently that the Heineken sold in the UK started to bear any relationship at all to the Heineken sold in almost every other country of the world. I could give you other examples but they all seem to be booze-related and you might start to wonder about me.

So, back to petrol pumps and the fact that we have to stand there like dorks when filling up the car.

I’ve found a way round it.

I have. I have overcome the senseless petrol forecourt tyranny enforced upon us by the ruthless Petrol Retailers Association working in collusion with their arrogant Whitehall overlords.

I just hit upon the idea of using a tennis ball. We keep some in the boot to throw for the dog. You just jam the tennis ball between the trigger and the trigger guard, then go off and explore your new-found freedom while the tank fills up.

I can’t tell you how happy this discovery had made me.

The first time I tried out the idea I immediately wondered what to do with the time that was now mine. I know – wash the windscreen. Trouble was, there was no bucket of soapy water with a sponge in it. Perhaps that’s another thing you only get in the States. There were no paper towels, either. The only thing I could put to use was a pair of flimsy see-through gloves. What could I possibly do with them? No idea.

So I waited, but not too close to the car. If anyone else drove up, I wanted them to see me and think: “That guy’s standing a little bit too far from his car to be able comfortably to hold the petrol nozzle. Wait…he’s not holding it at all. But how can his tank be filling up? I don’t understand. Hold on…he’s got some sort of device wedged into the petrol pump’s trigger mechanism. It’s *rubs eyes* it’s a common or garden tennis ball!”

But no one did.

Think about this: If the average UK motorist spends 1 minute 15 seconds filling up his car with a tankful of unleaded, drives 12,000 miles a year and averages 32 mpg, he really should take a long, hard look at reducing his carbon footprint.

But at least the tennis ball idea will save him literally minutes a year. 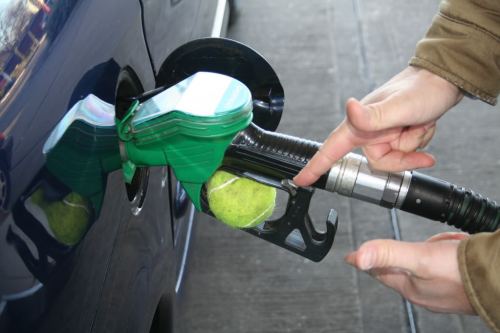 14 responses to “A ball-shaped piece of freedom”