I found a new playlist on my Spotify account the other day, called ‘My Shazam Tracks’. Surprise number one was discovering that Shazam and Spotify already know each other. I can’t remember making any introductions. But there they were, together on my phone, probably talking about me behind my back.

Surprise number two was finding out exactly what was on ‘My Shazam Tracks’. I’ve used Shazam maybe half a dozen times – in pubs or offices or listening to the radio, hearing a song and wanting to know its name and who it was by. Like everyone else, I suppose.

But instead of My Shazam Tracks showing just these few songs, it displayed a list of dozens. The ones I remember Shazamming were there – tracks by Bonobo, Caribou and a John Williams film score. But so too were others so familiar to me I’d never need an app to identify them. Songs by Stevie Wonder, Muddy Waters, Frank Zappa, the Stones… The idea of holding my phone in front of a speaker to find out who was responsible for ‘Gimme Shelter’ or ‘I Say A Little Prayer’ is ridiculous. I’m not even a huge fan of either song, although I won’t skip to the next track if they come on, something I’d definitely do with Iggy Pop’s version of Louie Louie. That’s one of ‘My Shazam Tracks’, apparently.

So what’s going on? I asked @SpotifyCares on Twitter and they suggested I contact @Shazam. @Shazam were clearly too busy wondering how they were going to spend the $400m that’s about to fall into their lap courtesy of Apple.

So it remains a puzzle, and one which today developed another layer of puzzlement.

Keen to learn whose record was being played on BBC 6Music, I turned to the digital display of my radio. As is so often the case, this potentially useful aspect of DAB was being used to tell listeners the name of the DJ rather than the song being played. Then I remembered Shazam, and it turned out the song was Nadine Shah singing Holiday Destination. I saw that I could add it to my Spotify playlist. So I tapped the icon and up came this: 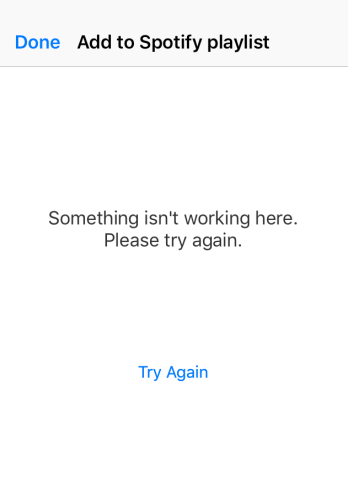 So I can’t physically add tracks that I like to ‘My Shazam Tracks’. Instead, a variety of songs – some good, some less so – is added to the playlist on my behalf by entities unknown.

It’s a funny old topsy-turvy world and no mistake.