Do you have much technology around your home? Probably. And do you find that it all works reliably, consistently and seamlessly? Probably not. Hopefully not, in fact. Because I’m reluctant to concede the idea that it’s just us who suffer almost daily occurrences of unreliability, inconsistency and seamlesslessness.

Here’s the set-up: An Amazon Echo and two Sonos speakers in the kitchen, an Alexa-enabled Sonos One in the bedroom and a few other Sonos speakers dotted here and there. A couple of TVs and Wi-Fi courtesy of Virgin Media.

For a while, everything worked as it should. Usually, anyway. At bedtime, we’d set the speaker in the bedroom to play the Alexa sleep sound ‘Rain On A Tent’ for 30 minutes, and neither of us would ever be awake to hear it end. (Trouble nodding off? Give it a try.)

In the morning, we’d ask Alexa to play Radio 4 or Radio Paradise (an ad-free station that plays non-challenging music of a certain vintage) and Alexa would happily oblige. Meanwhile, true to its raison d’etre, Sonos would stream music from Spotify in whichever room we wanted. We could watch Netflix, Amazon Prime, BBC iPlayer…

All was well, techno-wise. But gradually things started to go awry. Not hugely, as in total system failure. But in niggling, inexplicable ways. (I’ve compressed the timeline. This all happened – and is still happening – over a period of months.)

A request for Alexa to play ‘rain on a tent’ meets with ‘Sorry, I don’t know that one.’ I change the wording, making it explicit that I want the Alexa sleep sound. Same response. Luckily, there’s a phone app called RainRain that does much the same thing, although the sound quality obviously isn’t so good.

But then, a few months later, Alexa somehow rediscovers sleep sounds. Hurrah! We climb into bed and are soon fast asleep. Some hours later, I awake for a pee and find that rain on a tent is still playing. That’s weird – I’d set the timer for 30 minutes. ‘Alexa, stop.’ Alexa briefly pauses, then resumes. ‘Alexa, stop playing rain on a tent.’ Same thing happens. I physically turn it off, but Alexa immediately springs back into life with more rain. Eventually I have to unplug it and hope it doesn’t somehow re-energise, Christine-style.

In the morning, we plug Alexa back in and ask it to play BBC Radio 4. ‘Here’s BBC Radio 4,’ she confirms. But then – silence. ‘Alexa, play, er, Tom Waits.’ Nothing.

Downstairs, we ask kitchen Alexa to play Radio Paradise. She’s never had a problem doing this before, but now there’s just radio silence or ‘I’m sorry, I can’t find that one.’ I go online to try and sort things out. Some people say I have to disable the Sonos skill, then re-enable it. How that will help Alexa find a radio station? And what’s it got to do with Sonos anyway? But I go ahead and do it. The results are not what I expect.

Kitchen Alexa will now play Radio Paradise (RP), but has elected to play it through various Sonos speakers rather than via the Echo unit itself. This means we can’t control the volume using the handy buttons on Alexa, only via imprecise voice controls. Even more strangely, it’ll play the same four songs on a constant loop, with none of the normal station idents (Hippy Californian voice: ‘You’re listening to Radio Paradise daht cahm’). 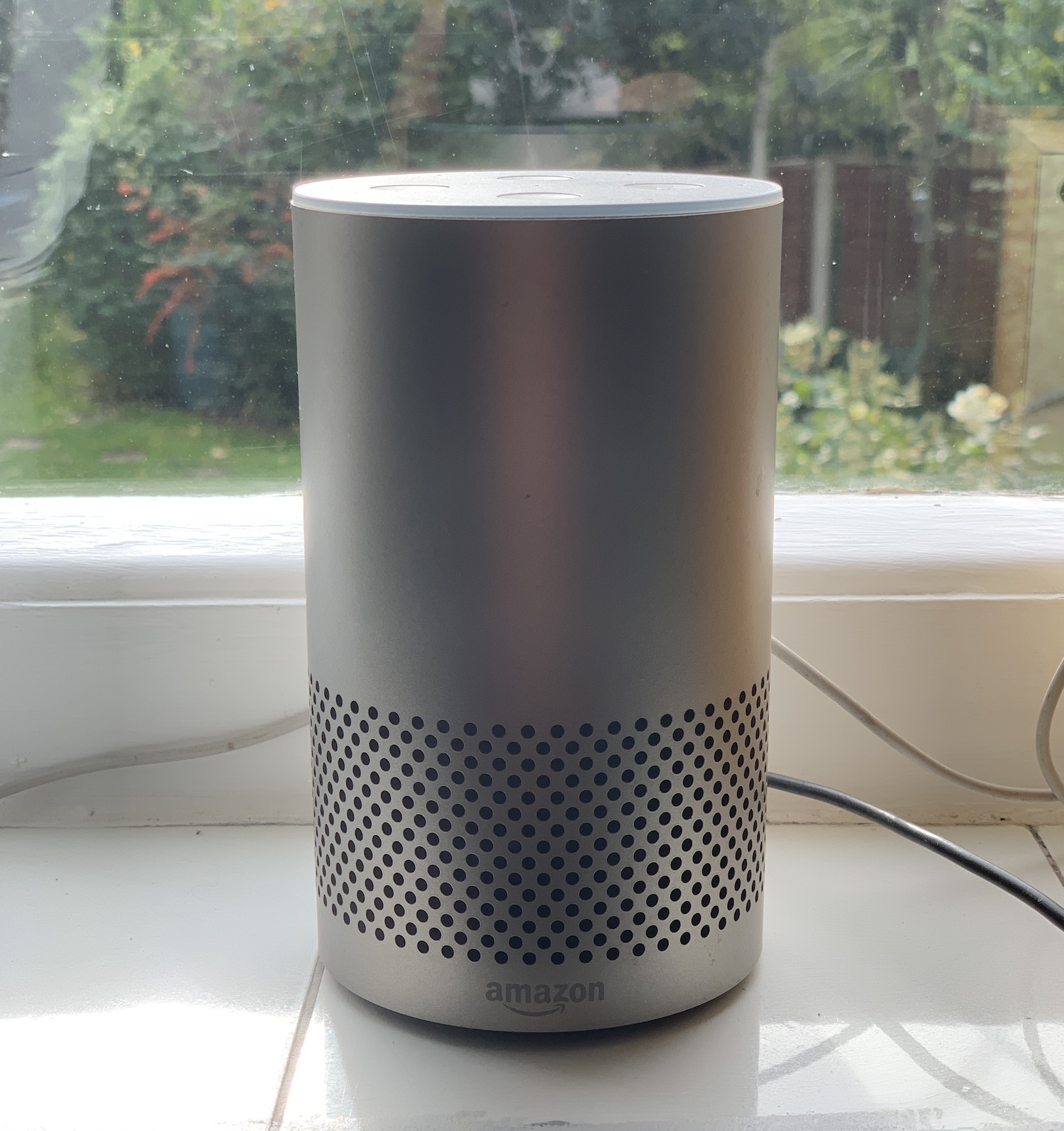 Meanwhile, bedroom Alexa says it WILL play RP, then a week or so later decides I’ve listened to it enough and refuses to play it anymore. FFS. I give it a few days and try again and, guess what, Alexa has evidently decided that RP is okay for us to listen to after all. But there’s a catch. We can only listen to one song. Which she plays again and again to the point of audio torture.

During one of my numerous attempts to get to the bottom of all this, I notice my iPhone is saying that our Wi-Fi security is weak. What new hell is this? I google the warning and discover that this is possibly the worst thing in the world, that passers-by will be emptying my bank accounts and ordering superyachts. But then others say it’s nothing at all to worry about at all; just Apple being over-cautious.  To be on the safe side, I set about reconfiguring the Virgin router. I enter the password and am told that it isn’t strong enough. Well possibly, I think, but that’s the one we agreed on three years ago, so let me in because I’ve got some serious reconfiguring to do. Nope. I can’t use my previously acceptable password until I’ve changed it to a much stronger and of course far less memorable one. So I change it. Now of course we have to update Netflix, iPlayer and Amazon Prime on two TVs. This is where my day goes.

(The irony here is that the TV is supposed to get its WiFi signal from our Tenda mesh system, which has a different password altogether. I AM SO CONFUSED.) 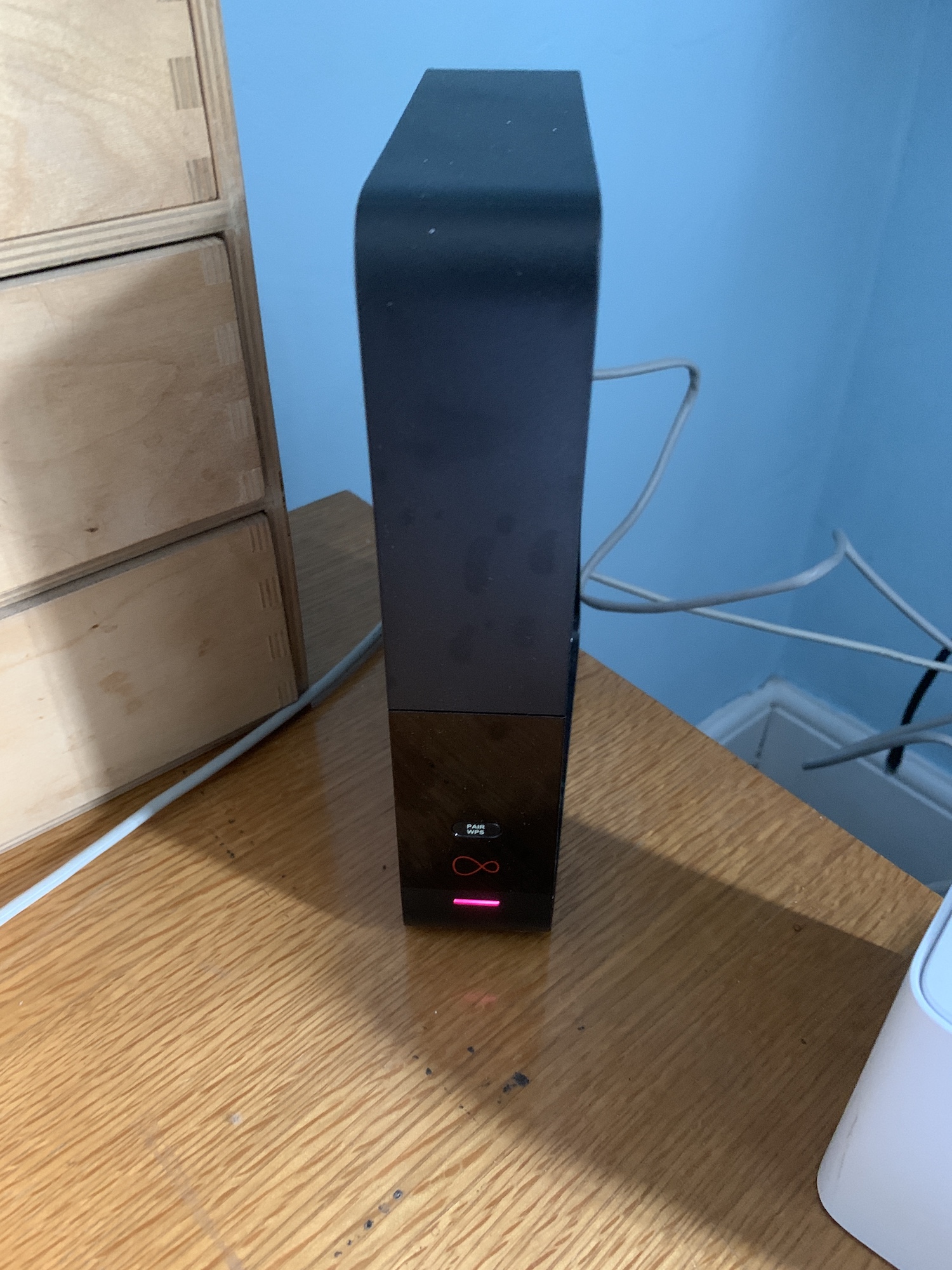 Anyway, can I reconfigure the router? Can I heck. I don’t have the skills or the patience. But I do notice that the little white light on our router is suddenly glowing red.

This could be bad – red is the international colour of imminent threat. I ask @VirginHelp for help. They ignore me. On Virgin’s website I learn that the reason it’s red is because the router is overheating.

Ignoring the fact that we’re in England in October, that the router isn’t perched on a radiator or been covered with a cloth and that we haven’t lit a small fire next to it, I nevertheless do what’s suggested and TIOATIOA. 15 minutes later it reboots with the same red light.

So I call Virgin and, after 30 minutes, get through to someone in Bangalore. “It means it’s overheating,” they say. “Turn it off and turn it on again.” I explain that I have already done this, that it’s not hot where we live, and that there are no nearby fires etc. “It’s nothing to worry about,” they say. “Just leave it.” But a red light signals danger, I say. The light should be white.

“Well, if you don’t like looking at it, says the Virgin expert, “cover it up with a cloth.”

When the country went into lockdown I started growing my hair. Now, some eight months later, I’m just about ready to tear it out.

Postscript: In preparing this blog post, I tried to AirDrop the photos from iPhone to Mac. It always used to work easily. But now, suddenly and you could say inevitably … it doesn’t.

Postscript #2: Something else to get my head around. WordPress has suddenly changed the way blog posts are created. Everything is different, and it won’t let me add captions to photos.