Another wine about Brexit

We popped over to France and Belgium at the weekend for a little jauntette. It was all plain sailing, except that we went by Eurotunnel so it was more like plain training.

We didn’t need to buy a visa in advance or complete any paperwork, because we’re in the EU and none of that is necessary. There was no need to apply for an International Driving Permit for France and/or Belgium before we could travel, and we didn’t need to contact our insurance company a full 30 days before departure in order to obtain a Motor Insurance Green Card.

We weren’t required to buy and display a big GB sticker on the back of our car.

We drove from Calais to Ypres at a steady 80mph on smooth, well-maintained roads where, if our car was fitted with one, cruise control would have been handy. Driving in mainland Europe is as close to the driving experience portrayed in car ads as I ever get. And if anything were to go wrong and we were involved in an accident, we wouldn’t be faced with life-changing bills because our European Health Insurance Cards would have entitled us to reduced-cost or even free medical care.

At Ypres, we visited the vast Tyne Cot Cemetery, the largest Commonwealth cemetery in the world and the last resting place of nearly 12,000 servicemen who died during the Battle of Passchendaele (total casualties there exceeded 475,000). Last year we spent a weekend in Normandy, site of the WW2 beach landings. It’s no leap of the imagination to suggest that the founding of the EU has in no small way helped prevent a repeat of those bloody battles, those unspeakable wars, those millions of deaths. 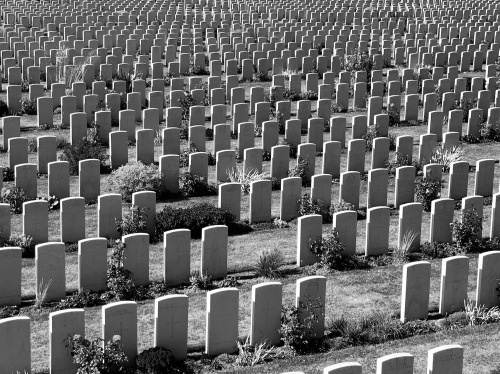 We nosed around the town for a bit (it’s lovely, by the way) then headed for the Menin Gate to witness the playing of The Last Post, a ceremony that’s been conducted at 8pm sharp every night since 1927.

With 30 seconds to go, the crowd of several hundred suddenly hushed, then the Last Post began. It was very moving, despite us arriving too late and not being able to see the buglers. Then a man on our left started chatting to his son, which drew a few ‘shh’ noises from people standing nearby, me included. The father’s enormous friend turned to stare down us down. So instead of being wrapped up in the solemnity of the occasion, I found myself wondering how people could be so utterly self-centred to think that it was perfectly all right to chat away during it, and also whether the big guy was going to be a dick and start something. He didn’t. Phew.

This bit’s got nothing to do with the EU, by the way.

After dinner we whiled away a few hours outside a bar situated directly opposite our little hotel, the Ambrosia. (What’s the WiFi password, we asked. ‘We will remember’ came the reply. Ah, I said. We will remember that. The manager smiled like she hadn’t heard the joke a thousand times before.)

Next morning, we set off back to Calais to conduct our main business, buying coffee, cheese and olive oil.

One of the advantages of living in the south of England, apart from not having to live in the north of England (note to self: delete this before hitting publish), is that you can access cheap wine and beer relatively easily.

In fact, outlets like Calais Wine Superstore and Majestic Wine Warehouse (above) make it even more tempting by paying for your crossing, provided you buy more than £200 worth of stuff. We were definitely going to do that because we are in the EU and so aren’t limited to the six-bottle limit that applied before we joined.

(There’s currently a rumour that the UK Treasury will maintain the status quo even after Brexit, as long as you can prove the wine you bring back is for your own consumption. To which I will produce an x-ray of my liver and say OK matey, what do you think? And anyway, the rumour might turn out to be a lie. I know! Almost inconceivable.)

Some people would say I’m depriving the UK of significant tax revenues by buying our wine and beer in France instead of in Tesco or Sainsbury’s. I try to avoid these people. But if cornered, I’d say that the French seem to manage quite well without taxing their booze to the neck. Public transport is cheap. The roads are good, even the toll-free ones. The provision of medical care seems, er, healthy. Everything works pretty well. OK, their TV is awful, but you can’t have everything.

I don’t know about you, but I grew up thinking that the USA was way ahead in terms of just about everything, then came the UK, then everyone else was way down there. This all stemmed from my post-imperial education, at a time when we thought Britain was pretty much the dog’s bollocks when it came to progress. It seems we still think that way, because the people who swung the vote in favour of Brexit are almost certainly the ones who never had the opportunity to see how the UK is, at best, on a level with our European partners. Plus loads of Leave voters are racists, but let’s not dwell on that.

Anyway. That’s that, as far as our little trips to France and Belgium go. Unless there’s a miracle, up will come the drawbridge at midnight on 31.10.19.

If only there was a next time