Brian Clough in the shower

It’s amazing what you can find in the attic.

Some years ago and as a result of my daughter’s school project, we discovered that the we were living in a house that used to be occupied by one John Seargent Noble. The name meant nothing to me, but a census from 1881 showed that he was a painter.

We wondered if he had been any good. Actually, we initially wondered whether he’d been a painter of pictures or of walls. But a call to the very helpful people at The Courtauld Institute confimed that he was a proper painter. We asked what kind of pictures he did.

“They’re very much of their time,” came the guarded reply. “They’re a bit chocolate-boxy by today’s standards.”

Hmm. We Googled the name and, sure enough, his work was bucolically wistful. Rural scenes of hunting-lite, heavy on the aah factor but otherwise unremarkable.

Pug and Dascshund. Don't ask me what the tin's all about.

That’s Noble’s style. Here’s another one:

He definitely wasn’t John Singer Sargent, the American painter with whom we briefly got him confused. Even so. We were living in a house that someone semi-famous had lived in.

Were we sitting on a gold mine? Or, rather, under one? 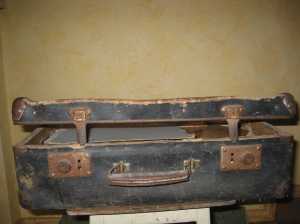 Did a suitcase like this contain lost masterpieces from the chocolate-box king?

We idly wondered whether he’d left any canvasses in the loft.

I’d been up to the loft before, mainly to check on all the boxes of crap that we’d paid people good money to bring from the loft of our previous house.

And I dimly recalled seeing a very old-fashioned suitcase up there, amongst all the other rubbish that the previous occupants had helpfully left behind. Old doors, metal cots, rolls of carpet. There was even an old train set up there. It didn’t date from Noble’s time, but it was certainly old. 1940s or 50s was my guess. Judging by the decrepit state of the railway tracks and the total absense of trains, it was still amazingly accurate.

I climb the rungs of riches into the attic of affluence and retrieve the trunk of prosperity. Hopefully.

It’s no easy feat getting stuff from the loft, a fact caused mainly by my aluminium extension ladder being too short to reach the loft’s access door. Instead of protruding up through the access door, the very top of the ladder falls about a foot short, and has to rest against the wall beneath the loft’s overhang.

Novel use for old ladders

Climbing in isn’t too bad, but getting out means having to judge where the top-most rung of the ladder is. Climbing down with one hand on a joist, the other holding a suitcase or whatever and with one foot gingerly feeling for a ladder rung when you’re nearly 4 metres above the ground is not the ideal way to spend your leisure time.

(The previous occupants had left an old wooden ladder behind, dated 1937, but I rashly converted that into a CD storage tower before realising that it would have been perfect as a loft ladder.)

The moment of truth

So I got to the loft and sure enough there was the suitcase. I shook it. There was stuff inside. Not clothes, judging by the hard, shuffly noise the contents made. And not, my mind dimly noted with relief, body parts. I heaved it down the ladder, then downstairs into the garden.

The catches needed a bit of WD40, but they clicked open pretty easily after that. I lifted the lid, and there inside were not any of the chocolate-box paintings I’d secretly been hoping for.

Instead, there were actual chocolate boxes. WTF? Chocolate box lids, to be more precise. Six or seven of them. Probably about 50 years old, judging by the Morris Minor parked outside the village Post Office and the Comet flying overhead. To say the scenes depicted on the lids were a bit, well, chocolate-boxy is stating the obvious. But, you know, why? Who thought it would be a good idea to finish the last Lime Barrell then say, I know, I’ll take the empty box up to the loft and store it in a suitcase up there? We will never know.

What was that about Brian Clough in the shower?

Oh yes. Sorry. So I was having a loft clear-out at the weekend and came across loads of old ads and brochures and stuff what I’d written over the years. They had to go, but not before I scanned in these ads that ran in the East Midlands of the UK in the late 1980s. They featured football manager Brian Clough as the acceptable, teetotal, non-sweary face of the East Midlands Electricity Board.

I remember the shoot, and saying to ‘Cloughie’ in a dull moment between shots, “I bet you could think of a few things you’d rather be doing, Mr Clough.” He replied with words that conveyed the impression he was in broad agreement. “Too fucking right. Advertising is a complete waste of fucking time and money; it’s fucking bollocks.”

Brian Clough and Bill Hicks. Peas in a pod.

Thanks for visiting and good luck with your bid. Hang on, wrong site…

6 responses to “Brian Clough in the shower”