The Beach Boys and creative ownership

A friend of mine describes the frustrations of not retaining a degree of control over his creative output:

Watching a documentary about the making of The Beach Boys’ Pet Sounds, I was amused by Al Jardine’s tale of suggesting they record the song ‘Sloop John B’. Brian Wilson wasn’t too keen, but Jardine showed him some chord changes and tried to persuade him it would be great. He then went back to work, and the next he heard was the finished track.

“I was really pissed not to be invited to the recording session, but I guess in the end I was pleased that the idea flew,“ said Jardine, ruefully. 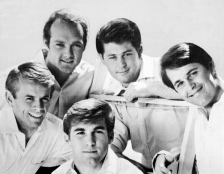 I wish I shared his insouciance. Whenever an idea of mine is approved and selected for production, only to be hi-jacked by others who change it and deliver the finished thing without involving me at all, I die a little. I know these are professional people who are good at their job, and are only interested in getting good work out into the light of day. And I know that I am not as good as I think I am at art direction, let alone knowing anything about today’s technical skills, but so what?

Our current CD is extremely good at people – one of the best I’ve known. He constantly praises and flatters us all, never taking credit for others’ work and delighting in the growth and achievements of the team. But he gets excited about good new work, and zooms off with it, overseeing every detail, all the way. Which includes tweaking the script, changing the jokes, adding new bits, etc.

And the finished result? I haven’t seen the latest one yet – I’m going to withhold this until I do – but I expect it will be excellent, loved by the client, and feathers in caps all round. So what am I fretting about? I guess it’s frustration about losing control and especially about not being kept in the loop as things progress.

I think what’s missing is a stage, or stages, in the production process where I – and others in a similar position – can be kept in the picture. That’s all – no-one has to take any notice of my suggestions or anything, just let me feel part of it. And defend my original idea where necessary.

Of course, if it all turns out like Pet Sounds then I won’t complain too much.

Do you recognise this scenario? I certainly do. The only thing I’d take issue with is my friend’s assertion that the people who change creative work are ‘are only interested in getting good work out into the light of day’. Maybe that’s what’s happening. Or maybe there are other forces at work. As HG Wells said, ‘No passion in the world is equal to the passion to alter someone else’s draft.’ This is especially true in advertising agencies when people spot a good idea. They want to alter it – ever so slightly – so that they can then claim a tiny bit of ownership for themselves. When you have everyone in an agency – not to mention everyone in the client’s office – itching to add their fingerprint to a piece of creative work, the result is very often the proverbial dog’s dinner.